At last we can put the election behind us and get on with life. Today I want to particularly look at one of the key drivers of price, and that is the balance of supply and demand.

Thank you to so many of you who gave feedback to the last market update (Issue 14 – What a Mess). It seems that the topic touched on an area that there was almost universal agreement.

Clearly, the demand for real estate has it’s foundation in population growth. Every person needs somewhere to live and so they either have to rent or buy. Therefore, as our population grows, so does the demand for real estate. Recently it was mentioned about population growth and whilst Australia is below the record levels, the country is still at a strong growth level based on a percentage basis, however, in real numbers that percentage is larger year by year. On current population growth trends, we need between 172,000 – 186,000 brand new properties built in Australia every year. That is based on the current census that says on average there are 2.6 people in every household.

That demand is channelled into either existing homes or apartments, or into brand new homes and apartments. Obviously, if we don’t build enough brand new properties through new developments, then it pushes all of that demand into existing homes. This pattern is what drives resale prices higher.

One of the problems we have faced in more recent times is that four out of five Australian’s live in the country’s 20 largest cities. This consists mostly of the Eastern Seaboard, down across Victoria and across to Adelaide. In fact, you will see below that the white shaded area is where 98% of the population lives. 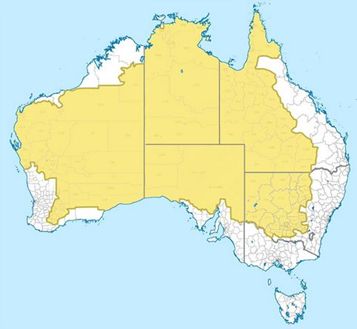 The big issue we have is that from 2006 through to 2011 the population growth excessively exceeded new constructions and that is a major part of the reason why we have seen strong price growth in the post-GFC period. We needed new dwellings to ease the pressure on resale properties and that has only occurred in more recent years.

How Can We Meet The Current Population Growth?

There are two figures we look at in this regard, first being development approvals. Just over 227,000 dwellings were approved in 12 months to May. That was down almost 3% from the approval numbers at the end of April 2016. In fact, the actual drop between the two months was 5.2%. This drop in approvals was the first since January and the biggest drop since November, which then the biggest decline was approval for dwellings.

One thing to remember is that nationally approximately 18% of all approvals never get to the construction phase. Either the developer loses confidence or he can’t get finance. So whilst approvals are currently above the numbers needed to meet the current population growth, we need many years of construction to occur to catch up on the undersupply that occurred in recent years.

Let’s look at actual construction. Remembering that there were 227,000 approvals in the year to May. The most recent construction numbers peaked in 2015, where we saw in the 12 months to December 2015, a record high of 190,072 dwellings constructed nationally. This is only a little above the numbers required and whilst eating into a little bit of the undersupply, we really needed many years of this to have a significant effect, which is why real estate prices are still very strong in the resale market.

It is concerning that construction levels are now declining, as it won’t help easing real estate prices. Part of the problem also is that banks are starting to deleverage risk and as such, they are shying away from financing some developments, or indeed limiting the financing that they will do. This cycle is making it more difficult for developers to build. Also, with us increasing stamp duty for foreign purchasers, plus banks almost stopping lending to foreign purchasers, we are taking away one of the real key confidence boosters for developers, and that, of course, is the ability to sell their product to overseas buyers, and as such many have decided not to proceed with new developments.

It will be interesting to watch this space going forward. Whilst Developers are seen by so many as greedy self-interested people, they are a vital part of any countries housing equation and we should do all that we can to encourage new developments in the right places to add to our housing supply and reduce the risk of over inflated annual price increases.

Well, that is it for this week and I look forward to being with you in a fortnight’s time.