Why Is The Australian Economic Performance A Stand Out?

Australia’s 25 years of unbroken economic growth continues, and in fact, is now posting a four-year high of 3.3% to the year ending 30th of June 2016. This milestone in Australia’s economic performance is leading us to a position where we may overtake the Netherlands for the longest period in the world by any country for expansion without a recession. It is not uncommon that we all believe the economy could be so much better, however, we should acknowledge that it also could be so much worse, especially when you compare the performances of countries throughout the world.

Equally as pleasing, is the news that the five-year slide in terms of trade and the national income, which has dragged down our economic growth and hit our budget revenues, appears to have come to an end according to the latest national accounts. The Bureau of Statistics reports a 2.3% rise in the terms of trade and the second quarterly rise in net national disposable income per capita which has led economists to suggest the so-called ‘income recession’ may be over. This has a lot to do with the fact that commodity prices have been ticking up on so many fronts suggesting also that the income drag from falling commodity prices is also over.

Certainly good news in both reports, however, naturally we want to see that trend continue.

Last week we saw that the Reserve Bank decided to leave cash rate unchanged at 1.5%. The Governor of the Reserve Bank maintained that a neutral bias is the mood of the bank at present. About the only area that may tempt the Reserve Bank to reduce interest rates further is in the inflationary space. It is clear Reserve Bank policy for inflation to range in the 2%-3% bracket and with inflation well below this target bracket, and having been there for some time, this may be the only reason to consider any further interest rate reductions. However, inflation appears to be trending upwards in the latest report. With economic growth ticking up and unemployment trending down it is perhaps signaling that we have finally reached the bottom of the interest rate cycle. It is unlikely to see any change in interests rates for the next 12 months of so.

The latest housing finance figures show that in 6 of the States and Territories (Being ACT, NSW, VIC, SA, TAS and QLD) that trend housing finance commitments are above decade averages and in 5 of those 8 economies the trend commitments in August were above a year ago. New South Wales retains the mantle of the strongest in the nation for new home construction, however, pleasingly Queensland has pipped Victoria into second place, with new stats up 34.2% above decade averages. It is great for the Queensland economy. 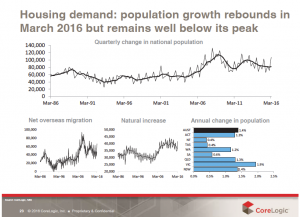 Capital city dwelling values shifted half a percent higher in October accordingly to Core logic with values rising across 6 or the 8 capitals. That means the quarterly change in capital city dwellings was up 2.7% and up on average 7.5% over the past 12 months. Now whilst home values are still rising, the rate of growth is slower than 12 months ago which is pleasing as it does suggest a more sensible approach and certainly a more sustainable market.

The below graph from Core Logic shows the annual rate of capital gain since September 98’ and how we have bounced around quite a bit in the past five years however always reflecting growth. I’m sure those owning properties are pleased that they have one and are picking up the capital gain that goes with owning property. 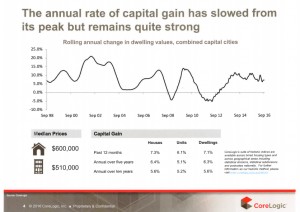 Why Should You Auction Now?

Last point today is also from Core Logic showing how significant auctions are and that auction clearance rates are at their strongest levels in more than a year.  A timely reminder as we approach The Event 2017 where we are already taking strong bookings from property owners wanting to be a part of this Iconic national event.

Once again if you would like more information our website is here or watch the video below.

Well that is all for now, I will be back in a fortnights time which will be approximately one month from Christmas Day. Wow. Hasn’t this year disappeared fast.